The Harz Library (German: "Harzbücherei") in Wernigerode is a scientific library focusing on publications about the Harz and surrounding area.

It holds literature about the city, shire and district of Wernigerode, genealogy, mining, geology, travel literature, fauna and flora, transportation, novels, bibliography, geography and history of Saxony-Anhalt as well as of Lower Saxony.

The Harz Library was founded on 15 April 1868. In those days it was part of the "Harz-Verein für Geschichte und Altertumskunde e.V.", an association interested in the history and archeology of the Harz.

The purpose of establishing an internal library was to promote the research of the history of Harz and to collect publications (preferably complete) concerning the subject "Harz".

After the Second World War, the scientific library was transferred into public ownership and was connected to the Harz Museum in 1955.

Due to the division of Germany it was no longer possible for the Association to operate in Wernigerode which is why they gathered publications in Braunschweig during this time span. When the borders between the GDR and the FRG were in the process of opening the inventory was substantially extended as the separately collected items in Braunschweig could now be transferred into the Harz library in Wernigerode.

Since 1992 it has been attached to the Public library of Wernigerode and was given the status of a Special Unit for the Regional History of the Harz.

In 2019 the Harz library listed 34,051 items. Those included books, newspapers, periodicals, maps, audio-visual and digital media as well as 2,000 postcards showing scenes of the Harz.

The library holds copies of the magazine "Zeitschrift des Harzvereins für Geschichte und Altertumskunde" (from 1868 onwards) as well as of the homeland magazine "Der Harz" which is being published by the "Harzklub e.V".

In the nearby city archive copies of the newspapers "Wernigeröder Zeitung und Intelligenzblatt" (dating from 1797) can be accessed as well as the "Wernigeröder Tagesblatt" (1887 to 1927) in the form of microfilms.

The volumes 1930 to 1945 of the Wernigeröder Zeitung (with some gaps) are now available in digital form and can be accessed at the computer workplace in the reading room.

Furthermore, the library came to hold literary works of renowned personalities who were mainly from Wernigerode. The largest collection was of Karl-Wolfgang Sanders from Bad Harzburg and encompasses more than 3,000 items and there are still more to be catalogued.

The Harz Library is also the centre of literature written by Victor Aimé Huber (1800-1869), a German social reformer and founding father of the German cooperative system. He lived and worked in Wernigerode until his demise. The library holds documents written by Huber and publications composed about his person and achievements.

The computer work station in the reading room can be used for research purposes within the library stock.
Several catalogues in book form record literature which is not yet listed in the OPAC (Online Public Access Catalogue).

If the literature you require is not currently held it can be acquired by inter-library lending.

There is also a photocopier and scanner available in the reading room.

Opening hours for the Harz Library

Special arrangements, especially for foreign visitors, are possible upon request. 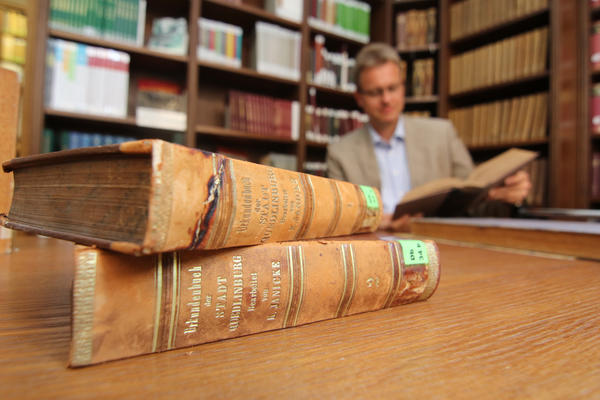